Posted by Unknown Posted on 12.48 with No comments 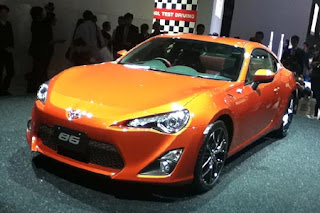 This car is a collaboration of Toyota, with Subaru. Both use the same 2.0-liter Subaru Boxer engine 4-cylinder gasoline technology combined with D-4S direct injection owned by Toyota. Collaboration technology is generating a total output of 187 horsepower at 7.000 rpm and peak torque of 151 lb-ft (205 Nm) at 6.400 rpm.

For Indonesia, the plan, Toyota 86 will be introduced in three variants: the manual transmission (MT), automatic (AT), and the TRD version. But the price Widyawati said no decision. "Definitely under IDR 700 million," she said.

Toyota 86 will be the five models that rains during this 2012 Toyota. Previously, Toyota has launched four new models that dimuai of Alphard MPV (January), hatchback Yaris and Land Cruiser (March), and the last sedan Camry (April).