Posted by Unknown Posted on 15.04 with No comments 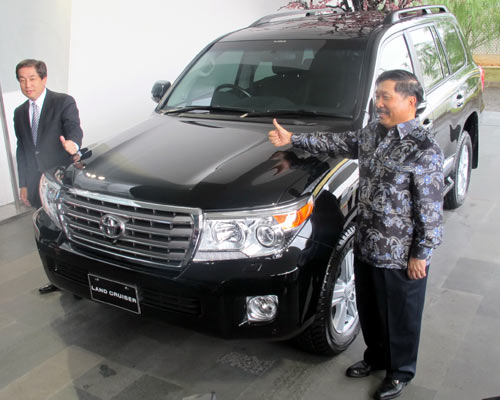 Toyota Land Cruiser SUV is one of the most senior of the earth. Been exploring the world for more than 60 years, the Land Cruiser also has evolved over five generations.

In Indonesia too, the Land Cruiser is well known. His name has been around since the launch of the Toyota Land Cruiser FJ-40 that used when launching the first sale worth IDR 4 million, which is an off-road vehicles are tough and never get stuck in the mud. Toyota now bring the latest generation.

More recently, PT Toyota Astra Motor inaugurate Land Cruiser 200 which is the fifth generation, has a modern appearance, the comfort level of single, as well as off-road capability worthy thumbs up.

Launching event held at the Ocha & Bella, Morrissey Hotel, Jakarta was attended by the entire invitation. Begins with opening remarks by Mr. Johnny Darmawan, as the President Director of Toyota Astra Motor. Then continued with the unveiling was awaited by the media.

The fifth-generation Land Cruiser that has experienced this refreshment, equipped rear bumper and new front. In addition, the latest Land Cruiser adopts new headlamp design, which led to look more fresh and modern.

In support of interior comfort, there is a comfortable seat that has been coated with leather. JBL Synthesis audio system is represented by a 14-speaker's ear can indulge in when driving. Complete with a 9-inch screen.

In addition to a choice of seven colors that already exist in older versions, the latest Land Cruiser is offered with three new color choices, such as the White Pearl, Black Mica Metallic, and Light Blue Mica Metallic. Standard version is priced spec IDR 1.185 billion as well as for the full spec valued IDR 1.475 billion.