Posted by Unknown Posted on 10.07 with No comments 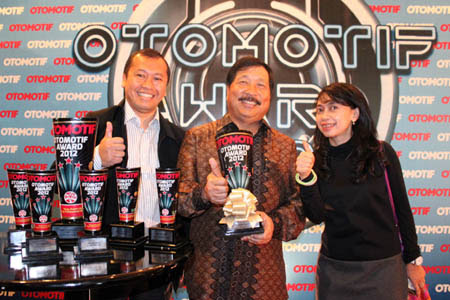 Toyota All New Avanza to gain success in the Automotive Awards 2012 event held Tabloid Otomotif. Avanza won three titles at once including the Car of the Year. Total Toyota won eight awards in the category wheel 4, and in the category of after-sales service.

Avanza won three awards including Best Mini MPV, Best of the Best MPV and Car of the year 2012. This achievement is one of the most comprehensive we've reached one fruit brand in the category wheel 4 in this award.

President Director of PT Toyota Astra Motor, Johnny Darmawan said the success of the Toyota All New Avanza as Car of the Year This is a great honor. "This award is both a crack for us to be able to continue to provide the best for Toyota customers. We would also like to apologize to customers who still have to wait to be able to enjoy the Toyota All New Avanza," said Johnny Darmawan at the awards show.

In addition, Toyota earned awards for sales, through Auto 2000. Main Toyota dealers in Indonesia that won the Best Innovation and Improvement Aftersales Service.