Toyota Targets for Next Year 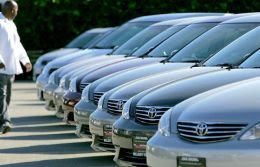 For Toyota Motor Corp., this year was a tough year. Earthquake and tsunami in Japan in March and large floods in Thailand last November, making the plant and its network was heavily damaged and not production. Toyota failed to send the car on demand so that the sales decline. The first half of this year, Toyota's position is under the General Motors and Volkswagen AG.

Next year is expected to have better conditions and a stronger foothold to sell more. Toyota Motor Corp. are targeting sales increase 20% to 8.48 million units worldwide. If achieved this so special, because Toyota has never sold that much throughout its history. Toyota achieved the highest sales in 2007 as many as 8.43 million. By 2013 Toyota hopes to increase its sales again as much as 6% to 8.95 million units.

Toyota still has a strong foothold in Japan, the Middle East, Southeast Asia and Australia. While in China, Latin America, Europe, Toyota is getting stronger. In the United States, although under pressure, but Toyota is still the third is positioned under the GM and Ford.

In Indonesia, Toyota car assembly production capacity in Karawang, West Java, from 110 thousand units to 180 thousand units in 2012. While sales this year expected to reach sales touched 310,000 units.
Get information of Toyota prices, discounts, cashback, promotions, bonuses we offer, by clicking the link below;