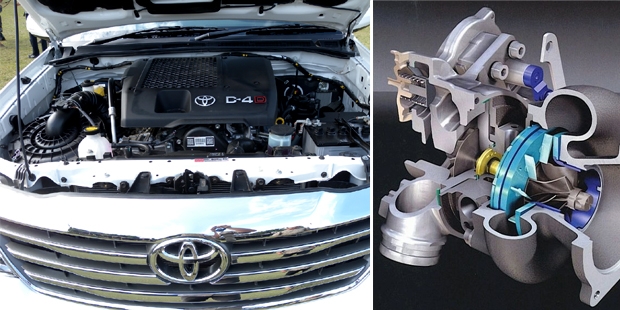 Variable Nozzle Turbocharger (VNT) and intercooler newly implanted into the Toyota Grand New Fortuner diesel engine is old technology. It is recognized by Iwan Abdurahman, Section Head of Technical Support Department Toyota Astra Motor (TAM). However, TAM's decision to use now, after a trial for 2 years. "Having differences with the VNT is sold in other countries," said Iwan.

VNT
Want to know how the turbo? It is like a pump. Blowing exhaust used to turn a turbine. Furthermore, a single turbine shaft with a "propeller" in the opposite direction. That is, if it is driven by exhaust gas turbines, propellers actually suck air into the engine. Faster and faster the wind, the turbine and the propeller spins quickly added. The air is sucked also increased.

Because it is played by the exhaust gases, the turbine work delays, especially at low speed. More specifically, occurs at an angle turbine fins "patent" or fixed (set off). Though the turbine rotation speed also depends on the angle the fins. Well on VNT - there is also a call to the Variable Geometry Turbocharger (VGT) - fin angle can be changed.

Changes also be adjusted by the speed of the exhaust gas blowing. As a result, the delay at low speed can be reduced, or the turbo working more steadily from low to high spin. Change angle turbine fins arranged by Engine Control Unit (ECU) based on engine speed. With this, the delay (lag) can be reduced, as well as prevent the occurrence of excessive pressure (round fins too stayed i) produced turbocharger.

Intercooler
Meanwhile, the intercooler cools the air being sucked and compressed by the turbocharger. Cooling is needed, so that the air masses reaching the combustion chamber more (higher air density, especially oxygen). The more times the air or oxygen can be aspirated and then compressed by the piston, the ability to produce energy also increases. Specially when burning diesel is sprayed into the combustion chamber.

Common Rail
Modern diesel engines using the fuel pressure accumulator system called the common rail. Furthermore, the fuel is sprayed into the combustion chamber by an electronically controlled injectors. Injector function - determines the amount and timing of fuel sprayed - regulated by the engine computer or ECU.

Well, a combination that is used to improve the working diesel engines today, including those used Toyota on the Fortuner.

It is very informative and interesting blog