Posted by Unknown Posted on 09.52 with No comments 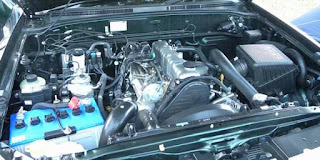 - Recalibration injection pump. Function, set back in order to approach the performance of diesel sprays the way to go. In addition, regulate the consumption of diesel fuel into the chamber via the nozzle kompresai.
- Ration supply of diesel fuel plus, optimum 5-10 percent. Actually, the standard ration the supply of diesel fuel each car is different and has no standard.
- If you have added, do not forget to reset the valve to be more tightly. The result, in addition to added supply, power has increased. In effect, the consumption of a little more extravagant, but it's easier and faster done.
- Promote a little injection timing and the addition of an electrical signal to the fuel pump to cope with the demand for diesel fuel. These devices can also lighten the work and reduce the symptoms of injector pump fake wind.
- Replace air filters have a lower resistance. Eg open water filters, although they had often to clean it so that the air flow remains smooth.

For existing diesel tech commonrail, can by raising the turbo, turbine and intercooler. Or, could the Dastek Unichip piggyback installation, consisting of the following piggyback plug & play cable. The addition of optimal power can reach 70 HP.