Posted by Unknown Posted on 14.20 with No comments 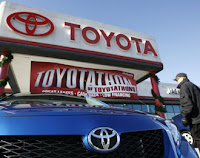 Three of the ten best-selling model in Indonesia during 2011 is a product of Toyota's and master the 27.1% national market share. These results indicate the magnitude of consumer confidence in the Toyota brand.

Toyota Avanza send 162,367 units to its customers over the past year or controlling 18.2% share of the national market. Toyota Avanza as well as a best-selling model in Indonesia, repeating the same feat last year.

Toyota also be the brand most widely placing the model in the top ten national sales. In addition there Daihatsu Toyota (Xenia and Gran Max), Mitsubishi (Colt Diesel and L-300), Suzuki (Carry and APV) and Nissan (Livina Series).

Ten best-selling model that controls 40.2% total market share or reach 359,176 units. The remainder is divided more than 10 other brands.

2011 is so important milestone for Toyota's business activities in Indonesia as well as national automotive industry. Over the past year, Toyota managed to meet the demand for 311,090 units consisting of 310,674 units and 416 units of the Toyota brand Lexus brand. Increased 10.8% from 284 thousand units in 2010.