Posted by Unknown Posted on 10.36 with No comments 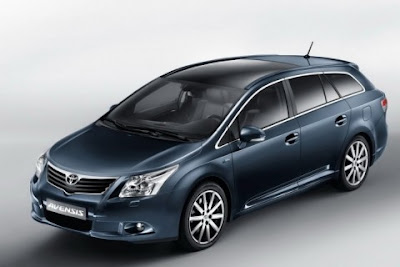 Toyota continued to refine their models, including the popular Toyota Avensis in Europe. Refresher performed in many facets and the results are displayed premiere at the Frankfurt Motor Show 2011. This model comes with a variety of new features, including the increased capability of the diesel engine and exterior and interior redesign.

2012 Toyota Avensis has a lot of engine choices, ranging from the new engine 2.0-liter D-4D turbodiesel engine that produces maximum power of 124bhp with 119g/kmCO2 emissions. This put him as one of the models that meet Euro 6 regulations. Other engine options is 2.2 D-4D is capable of producing maximum power up to 148hp. This machine is equipped with a Diesel Particulate Filter (filter out dust particles ejected normal diesel engine) or a Diesel Particulate and NOx Reduction (other than the particle filter also suppresses NOx emissions). Who prefer a gasoline engine, Toyota provides a 1.8-liter engine capacity with Valvematic technology that can produce power up to 145bhp.

Avensis retaining exterior dimensions but it appears more refreshed with a renewed in some parts. As in the front grille, headlights and fog lights. Behind visible on the rear bumper and rear combination lamps. While the options for a flexible rim that is 16, 17 to 18 inch. 2012 Toyota Avensis interior now uses higher quality materials, including leather upholstery and features Touch and Go Plus (satellite navigation system with touch screen latest Toyota). Also, 6.1 inch touch screen, Bluetooth and iPod connectivity and a rear-view camera.

Toyota complete with a variety of standard features such as Advanced Pre-Crash Safety (PCS) system (intelligent systems that can detect whether the car will experience the collision and prepare to face the worst situation), Adaptive Cruise Control (ACC) (cruise control that can regulate its own distance with the car in front), Lane Departure Warning (warn the driver if off track without realizing it) and Lane Keeping Assist, for the Avensis model 2012. Safety features added for 2012 Toyota Avensis is the Adaptive Front Lighting (spotlight direction to move in rhythm with the motion of active steering and speed of the car) as well as the main light technology with High Intensity Discharge (HID).