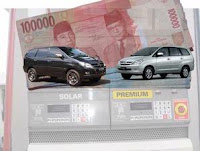 If asked, which one is better between the Kijang Innova diesel versus gasoline? The answer can not be directly to one of these machines.

Indeed, if you see the difference in price up to Rp 15 million / unit for the same grade, Innova gasoline obviously very attractive.

Consumers are certainly more and less interested when they hear the sound and vibration of diesel engines.

In fact, compared to conventional diesel engines, common rail diesel engine has a smoother sound and vibration is lower, although not yet able to beat a gasoline engine.

So, what positive value of the diesel engine? One and the most interesting is its fuel consumption more efficient.

Economical. Economic value of operating a frugal fuel consumption and diesel prices are cheaper is the main attraction of diesel engines. This is only for regular diesel or biodiesel with Premium. When using Pertamax, including Pertamax Plus and Pertamina Dex should be the daily menu Innova gasoline and diesel, the story becomes different.

First, when the price difference between diesel and gasoline is quite striking, the price is a major factor in most Indonesian consumers choose diesel engined vehicles. Because the daily operating costs actually make the diesel vehicle owner satisfaction. Very cheap!

Now, with the price of fuel is cheaper, car consumers do not think too much about the benefits of operational costs, let alone the price of diesel fuel (diesel) and the premium difference is not too much.

But certainly, if the vehicle is used daily with the distance away from the fuel consumption would be earned greater profits.

It is estimated that, in the first year, the cost of diesel engines greater investment.

The next year is covered by the operational costs are cheaper. And of course, diesel engines will be more profitable if often assigned to travel long distances.

In the second year, the Innova gasoline and diesel engines, has the same value. But after that, the economic value of the diesel engine can not be defeated by a gasoline engine.

In general, in a diesel engine, the component that needs to get serious attention is the air filter, oil filter, engine oil and fuel filters.

As for gasoline engines, in addition to the components as above, also get attention and spark plug replacement. If not, it will lead to inefficient work, let alone the more frequent use of Premium.

Sound and vibration of the diesel engine can be clamped so as not to get to the passenger space. But the cost is increased.

Resilience. Diesel engines are more resistant to the environment and working conditions are more severe. For example, hot weather and hot traffic jam. The more heat the surrounding weather and temperature, the better diesel engines.

Another plus, the diesel engine is not very sensitive to flooding and rain. Diesel engines are heavy labor.

Gasoline engine which works on a higher round perfect for those who like traveling at high speed. Top speed is better.

Others. With the above explanation, the question that appears at the beginning of the article to be missed.

When comfort and just used the first one or two years, Innova gasoline is more suitable. Conversely, if the user prioritize the economical operating costs, select the Innova diesel.

Get information of Toyota prices, discounts, cashback, promotions, bonuses we offer, by clicking the link below;