Posted by Unknown Posted on 00.01 with No comments 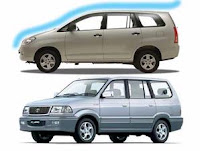 Fuel consumption is not solely determined by the capacity of the machine. There is no law, the greater engine capacity, more wasteful fuel consumption. With developments in technology, the assumption is broken. For example, the Kijang Innova gasoline as Best Ideal Indonesian Family Car. Although engine capacity 2,000 cc, is greater than the Kijang Capsule, 1,800 cc, Innova was more economical. Yet in terms of dimensions, the larger Toyota Kijang Innova.

More Aerodynamic
Two main factors, Innova is more aerodynamic body than the Capsule. Innova is more sloping front section or the term cool, streamlined, compared to Capsule. In addition, the surface of the body is also flatter and smoother.

Thus, when the vehicle is moving, so a lower wind resistance. Power needed to move not too large. As a result, the amount of fuel needed to propel the vehicle can be deducted. Other terms, consumption of fuel so more economical.

Sophisticated Machines
The second factor is the way to work or engine technology plus the power transfer components such as transmission. For supplying fuel into the engine, Innova injection system, while the capsule carburetor.

The fuel supplied by spray into the valve chamber in the engine. Here the fuel or gasoline mixed with air that is inhaled by the engine. Inside the engine, air and gasoline continues to mix more 'familiar' again. After that, compressed (compression), burned with lit by a spark produced by spark plugs. Then, an explosion that drives the piston and moving the machine and subsequently transferred to the transmission and wheels.

The advantages of injection systems, gasoline supplied to the engine with a measure that has been determined based on various conditions around the engine. Including many who inhaled the engine air mass, engine temperature and other parameters.

As for the engines that still use carburetors, gasoline sucked up by opening the gas valve which is operated through the gas pedal. The composition of the mixture may not be fit and difficult to manage in accordance with the engine working conditions.

Other technologies on the machine of Innova is Variable Valve Timing-Intelligent (VVT-i). With this technology, a mixture of gasoline and air into the engine rotation adjusted to working conditions and engine load.

VVT-i allows the engine to suck the air and fuel mixture by adjusting the opening and closing the suction valve optimally by using a computer. Air flows into the machine efficiently.

Drive by Wire
Not only that, according to Ahmad Rizal, Marcomm Manager of PT TAM, which previously was pioneered injection Kijang, Innova engine technology development is very much compared to previous versions.

For example, to set the engine speed or engine work is no longer using the conventional cable that connects the gas pedal to the throttle body or the gas valve. "Innova has been using drive by wire. In addition, a spark plug for a cylinder. The ability works much more efficiently. This makes the Kijang Innova become more efficient," he explained.

The problem, according to mechanical engineer by training, the errors were committed by Kijang drivers are less understand how to operate the pedals with this drive by wire system. "In the early stages of the gas pedal is pressed, the reaction was slower than machines that use cables. However, once it worked, so fast. Well, because it's a bit slow at the beginning, the driver often pressed the gas pedal again. As a result, of course, be a wasteful use of fuel," he explained.

In fact, to follow the standard Euro2, Innova is also equipped with oxygen sensors plus a catalyst (catalytic converter) to reduce exhaust emissions. The result, in addition to more efficient, the Toyota Kijang Innova gasoline engine is also more friendly to the environment.