Posted by Unknown Posted on 11.31 with No comments 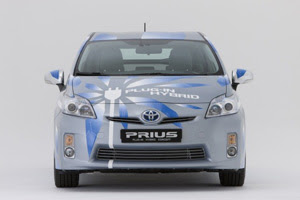 Prius Plug-in Hybrid has been waiting for will finally appear in the production version at the 2011 Frankfurt Motor Show next. This is the most environmentally friendly Toyota Prius and the most advanced so far. It took years to perfect. To ensure reliability, Toyota is holding a number of the world's best universities to test Hybrid Prius plug-ins in real life in many cities on three continents for months.

Prius Plug-in Hybrid show the latest development of Hybrid Synergy Drive technology. The technology is already trusted, proven and reliable it has served its users accumulative distance of approximately 200 billion miles across the world.

The new Prius is equipped with Lithium-Ion latest design and more compact size that was developed specifically to meet the stringent standards of Toyota's durability. His ability to drive only with electric power, helping the Prius Plug-in Hybrid achieves an efficiency of 2.2 liter/100km (45.45 km / liter) and lower CO2 emissions by 49 g / km. The figures were the result of ongoing homologation in Europe.

Prius Plug-in Hybrid creating new standards in terms of environmentally friendly mobility by providing the best for commuters who daily have to commute to the city. His ability to drive on electricity alone for short distances equip Prius hybrid engine that has proven very efficient. Plus, HSD technology so affordable that users expanded.

Prius Plug-in Hybrid will be a flagship (the best model) in a family of Prius which currently consists of the Prius and the Prius V (minivan).