Posted by Unknown Posted on 04.23 with No comments 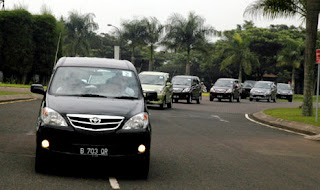 Toyota Avanza become the best selling car immovable for three consecutive years, 2006, 2007 and 2008, beating nearest rivals, the Nissan Grand Livina, Daihatsu Xenia, even Toyota Kijang Innova, according to data from the Motor Vehicle Industry Joint Indonesia (Gaikindo). Why Avanza so phenomenal in the eyes of consumers?

If quoted Johnny Darmawan, President Director of PT. TAM, the Avanza appreciated by the public because it is very suitable as a first car, the quality is excellent, economical fuel, the price was affordable, and strong after sales network throughout Indonesia.

Almost everything said Johnny was right. But, that does not mean Avanza flawless, it also recognized the Principals of TAM. In fact, according to some reporters who had doing trials since the Avanza was first in production of up to several times 'improvement' and the recent launch of the variant facelift some time ago, this 7 passenger MPV is still not flawless.

At first glance it does not much change in the New Avanza. But now, look more carefully and compare it with previous models, then it appears some of the details change.

Not long ago, Toyota Astra Motor lend stock of Avanza 1.3 G in color of Black Mica 5-speed manual transmission to be tested by one of the major automotive portal in Indonesia.

For three days Avanza facelift become operational as a self-owned vehicles, used for the office, meet with clients and other activities could even travel with the family.

In New Avanza G tested, the change also includes the exterior and interior. On the exterior, now VVT-i emblem which was originally pinned to the back door, moved to the front side (front fender). Part of the roof panel flat on the previous model , is now added lining. Similarly, the ornament on the fog lamp design that gets a touch of appealing color of the body.

Exterior side of the apparent change is the display center is now equipped with center mesh bumper grill that covers the upper and lower bumper grille, and looks more sporty. The backs have ornament chrome on the door that the limiting distance between the rear glass back door with the body. From behind, the ornament looks to be the hallmark of a more exclusive than the last Avanza G model.

Down the cabin, changes are visible from the interior color is ivory-colored on the previous model, now a greige. So even with the seat that is now in the design more interesting. Steering wheel did not escape the touch.

In addition to the three items above, changes in the New Avanza G also includes the combination meter with new design an attractive and easy to read. Similarly, changing the color of the original air conditioner registers dark brown, now dark gray. In terms of aesthetics, these two changes gives the impression of a more exclusive design of the center cluster to the New Avanza.

Apart from that minor changes, in terms of fuel consumption, certainly does not doubt the performance of coded K3-VE engine, 4 cylinder, 16 valve, DOHC, VVT-i, which also carried by this New Toyota Avanza. In addition to economical (13 km per liter), its engine capacity 1.298cc capable of producing maximum power of 92 PS at 6,000 rpm engine speed and maximum torque 12.2 kgm at 4,400 rpm engine speed.

When a test drive Avanza G on the freeway, its performance is quite responsive. Precede any other car, pounding power of the transmission gear shift response to a lower level does not make by this car then lost power. When driven faster, at a speed of 130 miles per hour, control of the car is still fairly stable.

However, at the speed it sounds enter the cabin space has begun to interfere. However, the general aspect of silence passenger cabin space for this car is quite capable.

As a car for the purposes of everyday activities, Avanza G by this also included having a high durability. With dimensions of 4120 mm x 1635 mm x 1695 mm, this car is quite nimble, agile, practical and stubborn.

And as a family car, aspects of a relatively roomy cabin space and more carrying capacity has become one of the requirements. Besides loading up to 7 passengers, some luggage for a trip with the family could also be easily incorporated into the trunk of a compact space.

From the results of this trial, arguably what is said Johnny Darmawan, true that the New Avanza appreciated by the public because it is very suitable as a first car, the quality is excellent, economical fuel, the price was affordable, and after sales network across Toyota's strong Indonesia. And another thing, selling a product which is quite high. How? Are you interested to buy this best-selling car in Indonesia?

For the New Toyota Avanza information, please click below: