Posted by Unknown Posted on 12.25 with No comments 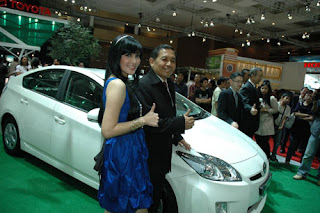 What is the first brand that comes to mind of a young child? The answer is Toyota. At least that's what Toyota achieved a Top of Mind Brand for vehicle on the young men categories. HAI Brand Awards Youth Award 2012 is given in conjunction with the celebration of the 35th anniversary of the magazine.

"We are grateful for the accomplishments achieved by Toyota as Top of Mind Brand for Car category. This achievement can not be separated from the support of the media who helped publicize the activities undertaken by Toyota so Toyota name can be properly embedded in the minds of consumers, "said GM Corporate Planning and Public Relations PT. Toyota Astra Motor, Widyawati Soedigdo.

Various activities related to youth done by Toyota, such as the Toyota Technical Education Programme (T-TEP) which has been running since 1991. T-TEP is a human resource development program, especially the SMK students, in order to meet the qualification standards of the industry. In addition to providing academic assistance, Toyota is also providing assistance in the form of supporting devices such as mechanical equipment to the display unit.

Toyota also has a container program of positive youth expression through modification of the Toyota Yaris Yaris Show Off event which has been running for 6 years. Yaris Show Off Event held in 10 major cities in Indonesia and continued to have a modifier-modifier creative every year.