Posted by Unknown Posted on 09.31 with No comments 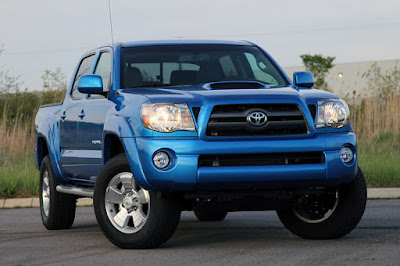 Toyota introduced the redesign Tacoma, best-selling compact pickup dimension in the USA. In addition to the increasingly trendy exterior, the interior is also upgraded. Tacoma is now growing comfortable with the increase in entertainment features.

New look seen on the muzzle, grille, headlights and front bumper. On the inside of the consumer can enjoy a new instrument panel with an enhanced gauge cluster. Also the wheel with new, more modern design. Center stack controls plus the AC / heater.

The interior now appear with a black color contrasts with the center console. Toyota also offers a heavy-duty all-weather Tacoma flooring if occasionally invited to play off-road. These rugs are available in Tacoma Tacoma Double Cab and Access. While versions of Sport and TRD Off-Road models are equipped with water-resistant seat upholstery. TRD Sports is also equipped with side mirrors and turn the lights plus 18-inch chrome wheels.

Improvements are also made ​​on the back-up camera which now has a higher resolution, the new temperature indicator, compass and mirror plus storage of goods in the ceiling.

2012 Tacoma had plenty of options to enable customers to choose according to their needs. These models offer a choice of four-cylinder engine efficiently organized also a powerful V6 engine with two-wheel drive system mapun four wheels.

2012 Tacoma offers two engines are 2.7 liter Dual Overhead Cam four-cylinder engine that can produce 159hp and 180lb-ft of torque, and 4.0-liter DOHC V6 engines that provide power up to 236hp and 266lb-ft of torque. If still not, TRD could boost up to 304hp V6 engine power and torque of 334lb-ft. Both engines are equipped with variable valve timing with intelligence (VVT-i) that helps build a large torque at low speed and medium.

In class, none is more sought after consumers than Tacoma. Last year more than 106,000 units sold. Compared to its closest competitor, the difference is very far away. Every two Tacoma sold, its rival just sold one unit.

Toyota Tacoma is known for exceptional value and toughness. Tacoma was chosen as "Most Dependable Midsize Pickup" in the JD Power & Associates 2011 Vehicle Dependability Study. While Intellichoice choose it as the "2011 Best Overall Value" in the compact pickup segment.